From the third part of the tutorial you will learn:

Let’s look again at the results we got in the second part of the tutorial. Figure 1 shows the classification results on the training set, which eventually reached up to ~95% (the blue line). Below there is the classification result for the validation set (the orange line). As you can see, the results for both sets began to diverge already around the 15th epoch, and the final difference for the 80th epoch was as high as ~25%. 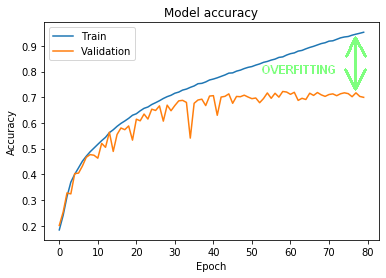 To better understand overfitting, imagine a real life example. A professional basketball player must have the highest quality shoes. He works with a footwear company, and this company prepares shoes that are perfectly suited to the shape and construction of his feet. This requires not only matching the shape of his feet to the shoes, but primarily it requires special insole. Now the basketball player feels great in new shoes and his game is even better. Does this mean that such shoes will be equally good for another basketball player or for amateur players? Probably not in the vast majority of cases. These shoes have been fitted so well to the feet of this particular basketball player that they will not perform well on another feet. This is overfitting, and companies that produce footwear try to design them in such a way that the shapes of the shoes and insoles fit the greatest possible number of feet, while ensuring the greatest comfort of play.

Yet another example – this time graphic. Let’s assume that we want to build a classifier that will correctly classify the data into “circular” and “triangular”. 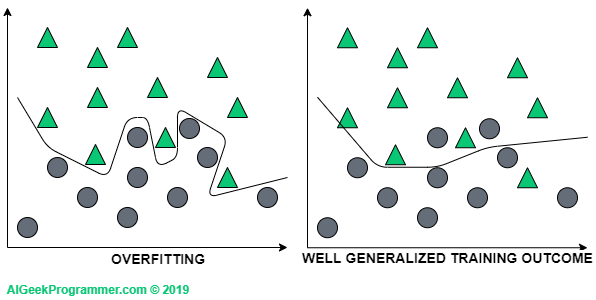 If we adjust the classifier too much to the training data, it will not be able to correctly classify the new data, because it is unlikely that these new data will fit perfectly into the distribution of training data. Therefore, it is better for the model to be less complex. Although it will achieve slightly worse results on the training set, it will probably generalize the problem better, so it will also classify new data more correctly.

How to solve the problem of overfitting?

OK, so how do you counteract overfitting? There are at least several effective methods for this. Below I will describe the most important ones and we will try to use some of them in our classifier.

We collect more data – this is often the most effective method to prevent overfitting. If the model sees more data it will be able to better generalize its response. Let’s remember that neural networks, and in general machine learning, loves huge amounts of data and high computing power. Unfortunately, often this method is the most difficult to use in practice or even impossible – as in our case when we have a closed dataset.

If we can’t collect more data, we can sometimes create it ourselves. Although it sounds quite breakneck and we may wonder if artificially generated data will improve the model’s response, in practice this method brings good results. Especially in image processing we have a wide range of possibilities in that area. We can slightly rotate, move, change its colors or make other more or less subtle changes that will give the model tons of new data. From a logical point of view: having an original photo of a horse, we can mirror it or change its color and it will still be a photo of a horse. This technique is called data augmentation and leading libraries offer ready-to-use tools. We will use one of them in the next part of this tutorial.

As I mentioned in the second part of the tutorial, each neural network has many so-called hyperparameters. They have a significant impact on the way the network works. They are part of the model architecture and by controlling them you can get better or worse results. When building each model, it’s worth experimenting to find architecture that gives us better results. Sometimes reducing the complexity of architecture gives surprisingly good results. Too complex architecture will be able to generate overfitting fairly quickly, because it will be easier for such a network to accurately fit to the training set.

From the model in the following form (the second part of the tutorial):

we will move to a much simpler one: 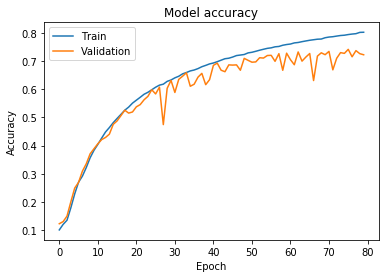 As you can see there are some benefits. About 2% higher classification accuracy on the validation set. Faster training, because the network is less computationally demanding. And also reduced, though not eliminated, overfitting – currently at around 10%.

The architecture of our first version of the network, proposed in the second part of the tutorial, assumed the processing of each image by three convolution “modules”, with 64, 32 and 16 filters, respectively. Such a complexity of the convolutional network allowed us to obtain about 80% accuracy on the training set, which translated into ~72% on the test set. For the record, it looked like this:

How to improve the accuracy of classification on the training set? One way is to deepen the convolutional subnet. By adding more layers and increasing the number of filters, we give the network the ability to capture more features and thus greater accuracy in classification. To achieve this, we will add one more convolutional “module” with an increased number of filters:

Covariate is a fairly widely used term, mainly in statistics, and means an independent variable, in other words an input variable. On the basis of input variables, output (dependent) variables are determined. By analogy, in machine learning, covariate will mean the input variable / input / X / feature. In our example, covariates are the values of the color components of individual pixels of processed images.

Although the datasets we use for machine learning are usually well-balanced, the division of the set into training, validation and test sets causes that these sets have different distribution of input data. For this reason (among others) we usually have a lower accuracy for the test set as compared to the training set.

Covariate shift occurs not only when splitting a set or enriching it with new data, but also as a result of passing input data through subsequent layers of the neural network. The network modifies data naturally by imposing weights assigned to connections between neurons in the network. As a consequence, each subsequent layer must learn data that has a slightly different distribution than the original input. This not only slows down the training process but also makes the network more susceptible to overfitting. The phenomenon of input data distribution shift in the neural network has been described by Ioffe and Szegedy and called internal covariate shift.

Ioffe and Szegedy proposed a method of data normalization performed between layers of the neural network as part of its architecture, thanks to which the phenomenon of internal covariate shift can be minimized. It should be noted here that some researchers dealing with the issue indicate that batch normalization does not so much reduce internal covariate shift, but rather “smoothes” the target function, thus accelerating and improving the training process.

For those interested: a wiki entry and a scientific article by Sergey Ioffe and Christian Szegedy, who proposed and described the batch normalization method. The article is rather technical, with a large dose of mathematics, but the abstract, introduction and summary are easily understandable.

The second very useful technique that effectively fights overfitting is the so-called dropout. It was proposed by Geoffrey E. Hinton, et al. at work Improving neural networks by preventing co-adaptation of feature detectors. It is a relatively simple, but also very effective technique for preventing overfitting. It consists in randomly removing individual neurons from the network (from internal layers, sometimes also input layer) during training. Because complex networks (and these are undoubtedly deep neural networks), especially those with relatively small amounts of training data, tend to accurately match the data, this deregulation method forces them to learn in a more generalized way.

In each training round, each of the neurons is removed or left in the network. The chances of removal are defined by the probability with which the neuron will be removed. In the original work it was 50% for each neuron. Currently, we can independently determine this probability, and for different layers it may be different.

Figure 5 – dropout as a technique to minimize overfitting

The use of dropout in practice leads to a situation in which the network architecture changes dynamically and we get a model in which one dataset was used to teach many networks with different architectures, and then was tested on a test set with averaged weight values.

The use of dropout in Keras comes down to adding another layer called Dropout (rate), whose hyperparameter is the probability with which the neuron will be removed from the network. We add dropouts to the densely connected subnet. Its use in the convolutional subnet is less common and basically misses the idea behind the convolutions.

In the convolution layer, we will use batch normalization, which is obtained in Keras by adding the BatchNormalization () layer. As a result, we will get the following new architecture:

As you can see above, I also proposed to change the optimizer from SGD to RMSprop, which, as shown by my tests, worked slightly better for the above architecture.

Here a small digression: you may be wondering where all these changes come from? Well, they come from two sources: from collected experience and experiments with a given network. I spent at least a dozen hours on the solution that I will finally present in this tutorial, trying different architectures and hyperparameters values. This is how it looks in practice, so if you spend the second day with your model and you have no idea what to do next, then you must know that it is completely normal and in a moment (or after a short break) you will probably go on with your work.

The network has been trained for 80 epochs and as a result we have achieved a classification accuracy of 81%.

A look at the chart for the training and validation sets gives mixed feelings. On the one hand, we were able to increase the classification accuracy for all three sets, including the most important, i.e. test set, by nearly 10% (from 71% to 81%). On the other hand, strong overfitting has appeared again, which means that the network is again “learning the training set” more than generalizing the classification. 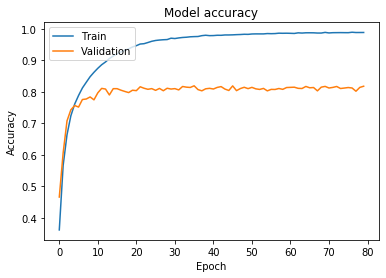 Figure 6 – the result of the classification (changed architecture)

If I wanted to get a better result than 81%, I would choose one of three ways. First, I could experiment with different architectures. I could refer to one of reference architectures that obtained very good results on the CIFAR-10 or similar dataset. Secondly, I could examine the response of the network to other hyperparameter settings – tedious and time-consuming work, but sometimes a few simple changes give good results. The third way is the further fight against overfitting, but with a slightly different method, which I have already mentioned above – data augmentation. We’ll take look at it in the next part of the tutorial.

At very the end of this part of the tutorial, I put some practical, loosely coupled tips that you can take into account when building your Convnet.

I invite you to the fourth part of the tutorial.

Data preparation with Dataset and DataLoader in Pytorch