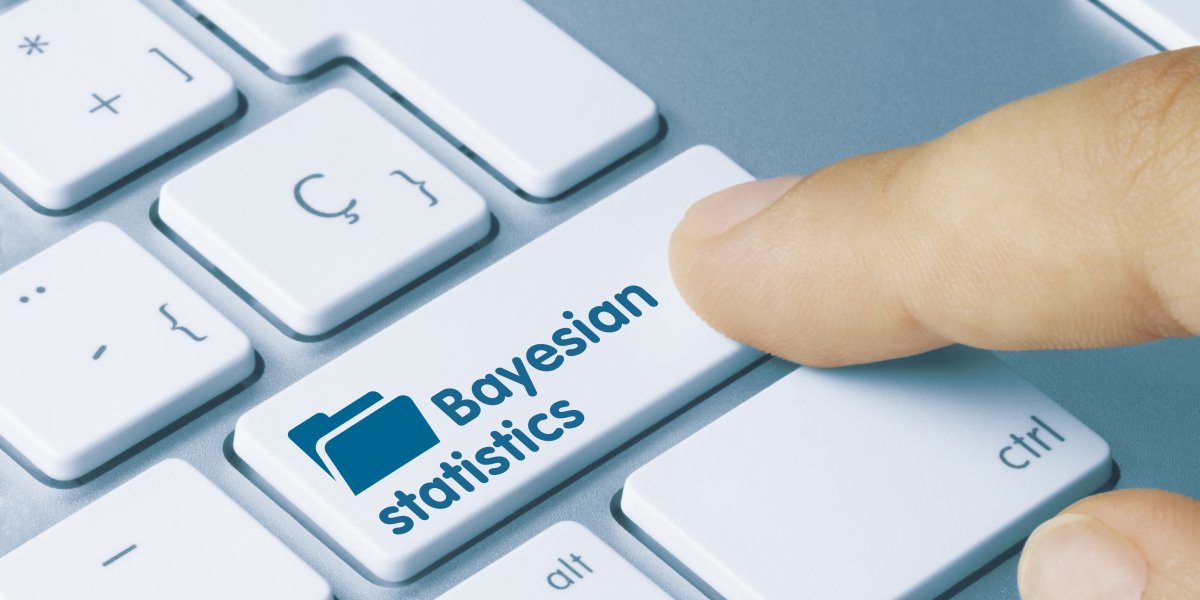 Do you like statistics? There is a high probability 😉 that you don’t. But don’t worry, statistics are not my strong point either. All in all, it’s hard to say why most people shun statistics, but I feel that many statistical issues are not entirely intuitive. Just reach for the gambler’s fallacy or Monty Hall problem. Interesting reading :-). Seriously! Regardless of whether you like statistics or not, the vast majority of machine learning is based on or uses statistics. And certainly Naive Bayes in machine learning or more precisely Naive Bayes Classifier.

Why is Naive Bayes actually naive?

I would like to explain this at the beginning, because it is a key issue for understanding the classifier principle. Suppose we want to classify some information based on several input features. Let this classification be sunny vs. cloudy based on: season, temperature, humidity and atmospheric pressure. In the case of the Bayesian classifier, we assume that inputs are completely independent of each other. In our example, one of the assumptions will be: the temperature does not depend on the season. How naive… 😉

In addition, we assume that each of the input features is just as important as any other. This is also quite naive, because although I’m not a meteorologist, I could bet that some parameters will have a greater impact on the sunny day, and others a little less.

It’s time to look at the data on which we will train a classifier. Since I am a basketball fan and I like to watch NBA games, I have prepared my own small data set on which you can do relatively simple manual calculations, but also run the algorithm offered by scikit-learn. We have the following columns in this data set:

Data is available for download in csv format: NBA – Naive Bayes. All “Yes” are represented by 1.0, all “No” by 0.0. If you want to import a file into OpenOffice or another spreadsheet, you should set the import parameters as follows: 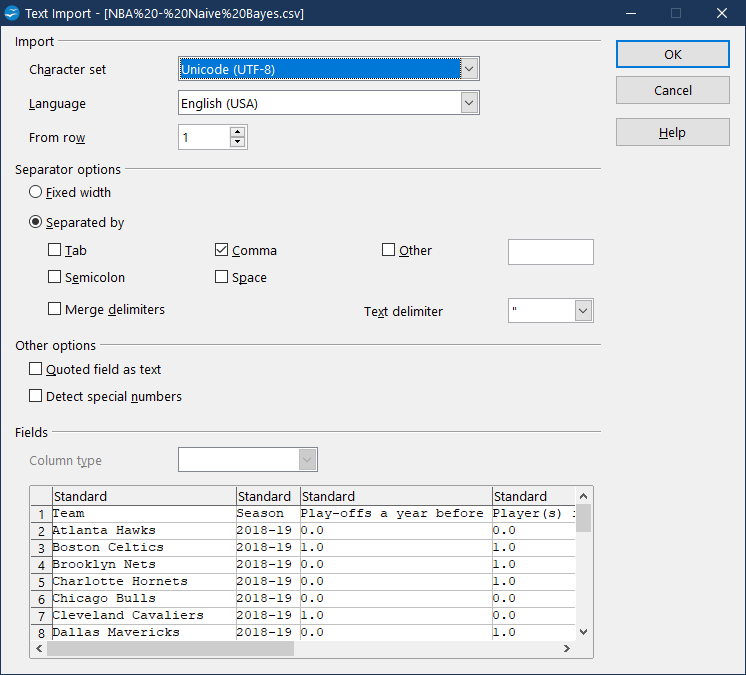 Before we start calculating the classifier ourselves, let’s use the scikit-learn library for this. I suggest that you create a new virtual environment using conda and run Jupyter Notebook. If you are not sure how to prepare a programming environment for machine learning, read my post on how to build it. In addition to the packages listed in that post, please add also the scikit-learn library.

First, we import the numpy and pandas libraries and load the .csv file into a dataframe:

We display the first few lines of the dataframe:

As you can see, the data loaded correctly. In addition, the dataframe object adds the first indexing column. Columns No. 2 “Team” and No. 3 “Season” are descriptive and we will not use them in the learning process. The last column – No. 7 “Play-offs” – is in turn an information about whether the team qualified for the play-offs or not. This is our target, i.e. actual qualification for play-off or not. The columns No. 4, 5 and 6 will take part in the learning process as input data and No. 7 as the target (label). Therefore, we need to transform the data so that we get two variables. One with the columns 4, 5 and 6 and the other with the column No. 7. First, let’s make a copy of the dataframe containing only columns 4, 5 and 6:

In the next step, we convert the dataframe to the numpy array and then repeat the entire operation for the target variable:

Having prepared data in numpy tables, we can pass them on to a classifier provided by the scikit-learn library.

Looking through the scikit-learn documentation for Naive Bayes, it’s easy to see that we have several classifiers available. A question: which one to use?

Before we get to the code, it is worth noting that our data set is very small and contains only three input parameters. Modern basketball is an advanced sport in which many factors play a role. Teams competing at the highest level try to refine every aspect related to the technique of the game, team tactics, players’ health, or even such issues as nutrition, supplementation or travel logistics. To assess the team’s actual chances of entering the playoffs phase, dozens inputs, if not hundreds, should probably be taken into account. Definitely a lot more than just three ;-). Hence, the result we get should be taken with a grain of salt, and the goal of this simple exercise is only to familiarize you with building a classifier and the theory underlying Naive Bayes in machine learning. Moreover, it is a good practice in machine learning to separate the learning and test sets. We will not do this because of the size of our data set and the rather theoretical nature of the considerations described above. Returning to the code:

To check how well the classifier handled the data, we calculate accuracy:

How to manually calculate Naive Bayes in machine learning?

We have reached the point where you can no longer hide behind the proven machine learning library and you have to roll up your sleeves for work 😉 . Using Naive Bayes in machine learning is actually nothing else but creating a statistical model. More precisely – the probability model. We must therefore reach for some statistics. By creating a probability model for the classifier, we try to answer the question: what is the probability that we are dealing with some class C, assuming the input data, x1, x2, …, xn? In our case, it would be, e.g., what is the probability that class C = team will play in the playoffs, assuming that x1 = the team played in the playoffs last year, x2 = the team does not have a representative in the All-Star Game and x3 = the team spends less on salaries than at least half of the other teams. This problem can be written down as the following formula:

We read this formula: What is the probability of class C having a given input vector Xn.

In our simple example, when we have 3 binary input features, the model could be built by calculating the probabilities for each variant. However, usually there are many more features (and thus their combinations) and in addition they can take continuous values, which means that the problem formulated in this way cannot be easily solved, if at all. Here, Bayes’ theorem comes to our aid. The theorem assumes “naively” that the input features of X are independent of each other and each of them is just as important for the model. Again, this is a very large simplification of the real-life scenario, but first of all it works 😎 , and secondly it allows to significantly simplify the calculations. Bayes’ theorem looks like this:

And for our simple example you can write it like this:

Believe it or not, but by creating this classifier we may completely ignore the denominator of this expression. Why? Let’s assume that we want to answer the question whether the team will play in the playoffs this year (C = Yes) or not (C = No), providing x1 = Yes = the team played in playoffs last year, x2 = No = the team has no representative in the All-Star Game this year and x3 = No = the team spends less on salaries than at least half of the other teams. We will know the answer if we can calculate and compare the probabilities for both classes:

Will we consider the denominator at all when assessing which of these probabilities is higher? No, because it is the same in both expressions. Therefore, only the value of the nominator will decide. This will simplify the equation:

What’s more, since we operate on naive Bayesian assumptions, and more precisely since the features x1, x2, x3 are independent of each other, we ultimately calculate the probability for a given class C using the formula:

Remember that the above formula is a variant for: two classes and three input data. However, it can be generalized to the following form:

Returning to our simple example, in which we have two classes C and three input parameters X. In order to be able to calculate the probability of class occurrence for any combination of input parameters, we need to have the probability values of each class – P (C) and all combinations P (Xi | C ). I suggest you try to calculate it by yourself. It’s best to use the spreadsheet and filtering options for this. Don’t worry if you make any mistake (I probably did it as well somewhere below 😉 ) – all these tedious calculations will ultimately be carried out by the machine. And we only want to understand the methodology and the principles of the Bayesian classifier.

I collected my calculations in the table below.

Having calculated the individual probabilities, we can attempt to compute the classification for an example input data. Let’s look at the Atlanta Hawks. This is a young team with high aspirations for the 2019-20 season and with a rising star of the young generation – Trae Young, who I bet will be in the All-Star Game in 2020. This gives us x2 = Yes. In the 2018-19 season, Atlanta was out of playoffs phase (x1 = No). As for players’ salaries the Hawks spend the least in the entire league (x3 = No). For such input data, we want to calculate two probabilities: P (C = Yes – will play in the playoffs) and P (C = No – will not play in the playoffs), and then compare which of them is higher and hence which will be chosen by our classifier.

Because when comparing the probabilities for both classes we can ignore the denominators (they will be the same), it should be added here for the sake of accuracy that we will not calculate probabilities, but only nominators of the probability formula. However, this will be sufficient for correct classification.

For the Yes class (the Atlanta Hawks will play in the playoffs) we have:

For the No class (the Atlanta Hawks will not play in the playoffs) we have:

As you can see, the higher value, and therefore the higher probability, has the variant in which the Atlanta Hawks will not play in the playoffs. However, I hope that our classifier is wrong 😉

If you liked my post about Naive Bayes in machine learning, please share it with your friends.

Are you looking for more information about machine learning? Maybe you will be interested in my other posts? For example, the one about logistic regression or this one about handwriting recognition.

Good luck in your studies!

Data preparation with Dataset and DataLoader in Pytorch